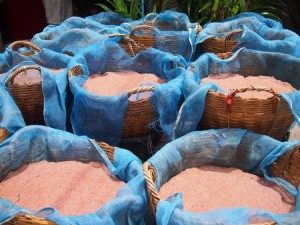 For truly authentic Southeast Asian cuisine, you really should incorporate Shrimp paste as a seasoning substitute for salt.

Shrimp paste is integral not only to the cooking of Southeast Asia but is also used in Southern China and Bangladesh. It is used extensively in these cuisines as it imparts a rich and robust savoury flavour to food and completely replaces the need for any addition of salt.

Shrimp paste is known by many different names depending upon the region where it is made. For instance, in Thailand it is known as Kapee or Kapi, in Indonesia – Terasi or Trassi, in Burma – Ngapi, Belachan in Malaysia and mắm ruốc in Vietnam.

Thai Kapee Shrimp paste is made from tiny shrimp or krill that are fished from the sea then rinsed clean before being mixed with salt. The mixture is allowed to ferment for approximately 24 hours before being partially dried in the sun for several days. It is then drained and pounded into a fine paste before being tightly packed into containers in layers pressed hard together to exclude all air. This ensures that the paste cannot spoil as it is then left to further ferment for several months. The resulting paste is quite solid with a pungent smell and flavour.

Shrimp paste should always be cooked before consumption and used sparingly as it does have a potent flavour. The intense odour of the paste will dissipate upon cooking and it will keep for an extremely long time, particularly if it is refrigerated in an air-tight pack.

Retro food is back in vogue!

Nostalgia has crept into our food culture with a surge in popularity of the dishes we loved in the 1970s. There is no doubt that some of them are probably...

Splice it with Spice – Wedding Favours Bespoke wedding favours will add that 'extra something' to your wedding celebrations! Unconventional and innovative, our spice tins filled with authentic Cajun Spice...